Causes of Motorcycle Accidents in Tennessee

Posted in Motorcycle accidents on January 23, 2023

Motorcyclists must be vigilant when they are on the roadways of Tennessee. Unfortunately, motorcyclists are much more vulnerable than other drivers on the roadway because they lack the protections afforded to others by their vehicles. Here, we want to examine some of the most common causes of motorcycle accidents in Tennessee. 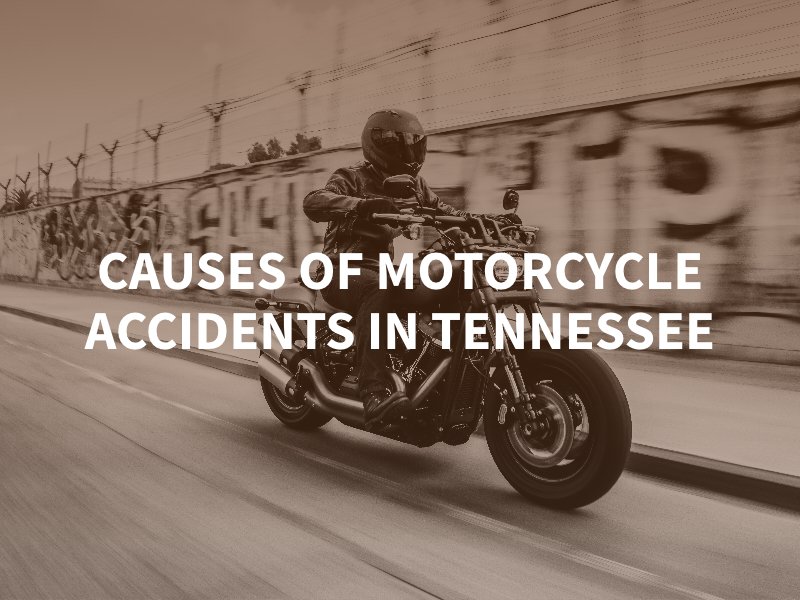 When we examine data available from the Tennessee Department of Transportation, we can see that there were 2,875 total motorcycle crashes during the latest reporting year on file. For the time frame ranging from 2016 to 2021, there were more than 17,000 total motorcycle collisions in the state.

Distracted driving is a leading cause of accidents, which is why states have passed so many laws regarding cell phone usage while operating a motor vehicle of any type. However, you can only regulate so much, and cell phones are not the only type of distraction. Any type of distracted driving is likely to take a driver’s or motorcyclist’s attention off the roadway and increase the chance that an accident will occur.

One big problem motorcyclists often run into on the roadways of Tennessee is that other drivers fail to yield the right of way to them appropriately. Motorcycles are considered complete vehicles, and every other driver must respect them and follow the laws of the roadway. Failing to yield to a motorcyclist is dangerous and deadly.

Due to their smaller size, motorcyclists are much more likely not to be seen by other motorists. It is crucial for all drivers to check their blind spots before changing lanes to be sure that there is not a smaller vehicle or motorcyclist in their way.

Even though most people would think that the nighttime is more dangerous for motorcyclists, the data shows that the vast majority of collisions occur from approximately noon until 6:00 or 7:00 PM. However, that is not to say that motorcyclists driving at night are necessarily safer. The reality is just that there are more motorcyclists on the roadway during the daytime hours. The time of day significantly impacts how much traffic is on the roadway, and motorcyclists are more likely to be involved in a collision when the roads are busier.

Age of the Rider

Surprisingly, the rate of motorcycle crashes amongst various age groups is relatively steady. These incidents can and do affect any person who operates a motorcycle. Even though most collisions occur to in those between the 20 to 30 age range, there is still a significant number of collisions at every age range up until approximately 65 years of age.

Intersections are incredibly dangerous areas, not just for motorcyclists but for all vehicle operators. Intersections are areas where drivers attempt to accomplish various things, including turning, waiting to move forward, and stopping for pedestrians and other types of traffic. Over the last five years, 32% of all motorcycle collisions occurred at intersections in the state of Tennessee. These are areas where motorcyclists and drivers alike must be vigilant and aware of one another.

If you or somebody you care about has been involved in a motorcycle collision in the state of Tennessee, you should reach out to a Nashville motorcycle accident attorney as soon as possible. Motorcyclists often struggle to recover compensation, even when they have a legitimate claim. Insurance carriers and at-fault parties will often push back against a motorcycle accident claim, which could result in a person receiving much less compensation than they deserve.

Any motorcyclist harmed due to the negligent actions of another driver should be able to recover compensation for their medical bills, lost income, out-of-pocket expenses, pain and suffering damages, property damage expenses, and more. You deserve an attorney who will fight for your rights against the insurance carriers or during a personal injury trial.