What are some of the most dangerous intersections in Nashville?

Our firm is dedicated to helping people recover from serious injuries. However, our commitment to the safety of our community led us to ask; how can we help people before they need to step foot in our office? We wanted to find out where Nashville residents are exposed to the highest risk of collision and injury when on our city’s roads and highways.

So, we teamed with the data analysis and visualization experts at 1point21 Interactive to identify the most dangerous intersections in the greater Nashville area. We analyzed over 37,000 collision records from 2015, identified 61 high risk intersections, then calculated crash and injury rates for each based on annual traffic volume and ranked them accordingly. Below are the results of our study. 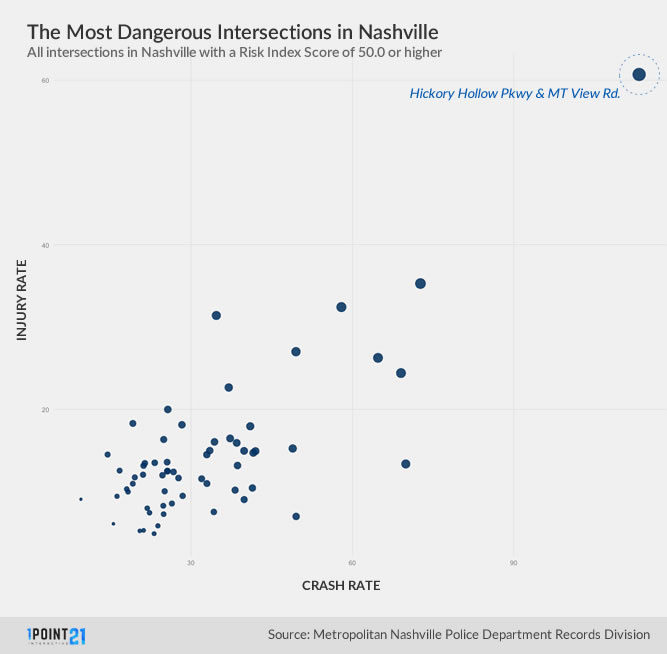 The Most Dangerous Intersections in the Nashville Area

*Rates are expressed per 10 million vehicles that pass through each intersection. Rankings are based on crash and injury rates, with injury rate more heavily weighted. More on this in the methodology. 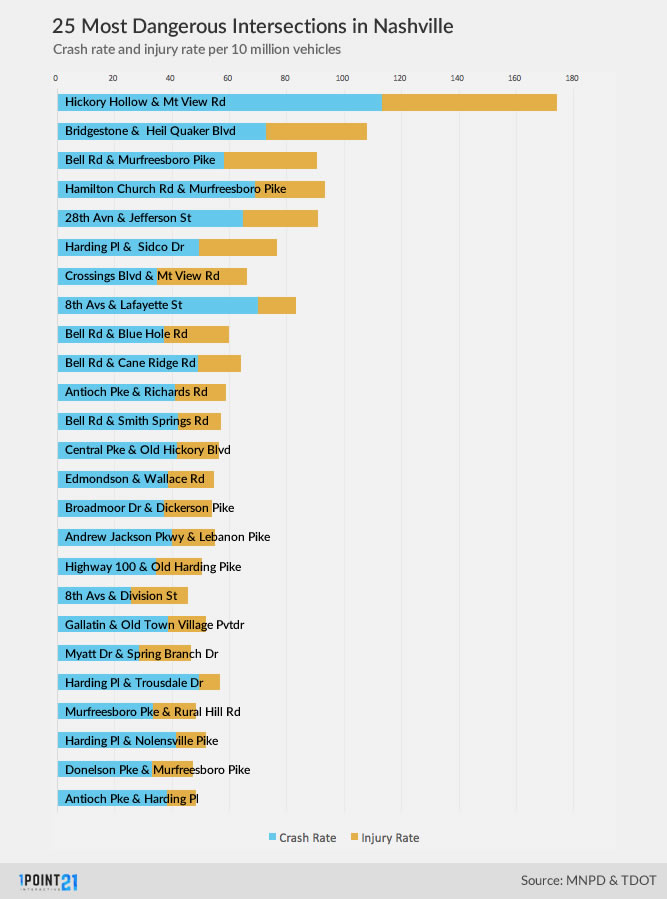 In order to identify our most dangerous intersections, we first had to find raw collision volume for each. We started the process by parsing over 37,000 collision records and ended up with a list of 588 intersections with ten or more collisions. Next, we calculated a Risk Index Score (RIS) based on number of crashes, injuries, fatalities and hit and run collisions at each one. This allowed us to zero in on high collision volume intersections as a starting point for our study.

Raw collision data alone can’t tell you everything, however.  Taking exposure into account (the number of people exposed to those # of crashes/injuries) helps give us a much more complete picture. We accounted for exposure by calculating crash and injury rates for the 61 intersections with the highest RIS (over 50.0 in this case) using traffic volume data obtained from the Tennessee Department of Transportation. This allowed us to compare larger and smaller, busier and more lightly trafficked intersections with a greater degree of accuracy.

The table below shows the raw collision volumes and RIS for the initial 588 intersections.

*Note: Initially, we identified 63 intersections with an RIS over 50.0.  However, two were located on Highway ramps, therefore we did not include them in our exposure analysis.

Please confirm deletion. There is no undo!